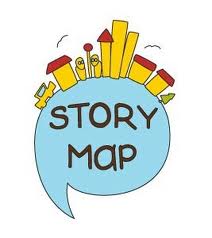 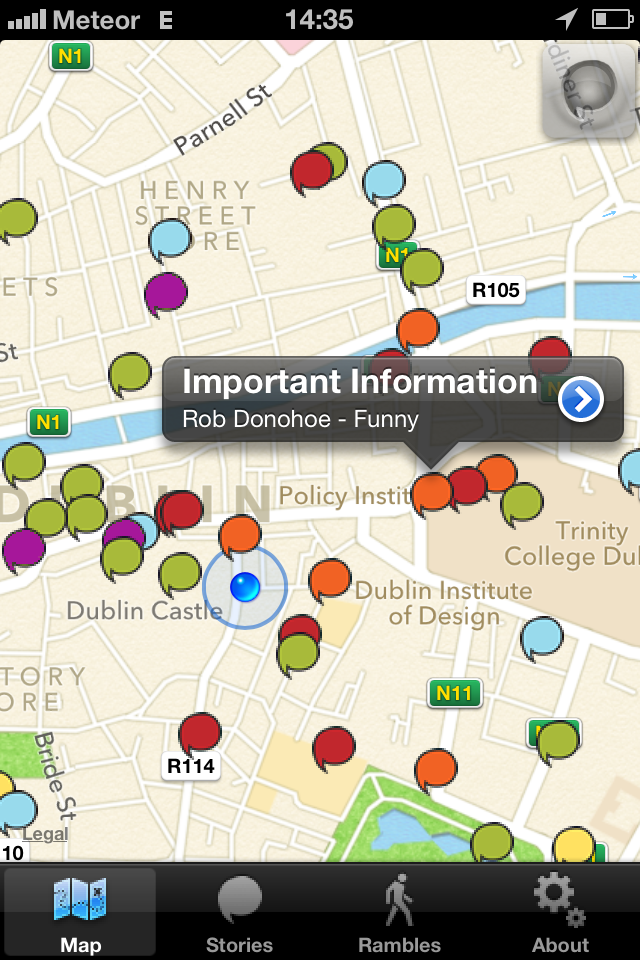 A new and completely unique way to explore the city was unveiled today, with the launch of the Storymap App, which lets users tap into the hidden stories of Dublin as they wander around its streets. The app rejuvenates the age old tradition of storytelling –  combining it with the latest technology in film and mobile apps to capture the essence of Dublin life, past and present. Included in the app is a huge library of 80 stories, presented in crisp audio or HD video, each tied to a location in the city and told by a different Dubliner, all with their own unique voices. This opening collection will grow by 4 stories a month, as the Storymap continues expanding.

“For a local, it gives them a chance to see the city with fresh eyes” explains co-founder Tom Rowley “Walking around Dublin I always used to wonder ‘What happened here?’ and the app gives you the answers – you’re walking on layer upon layer of fascinating stories, both personal and historical. On O’Connell Street alone there are riots, risings, nervous dates, and hoax plaques – along with hundreds more we’ve yet to capture. By using the app and seeing a well-told story on the spot, you get to see it in a whole new light, and build a new connection with it”.

The app is the product of two years’ work tracking down the finest stories and storytellers of the city and capturing them on film. Tom Rowley and Andrew Flaherty first launched the project in 2011, with the website Storymap.ie, which showcases the stories online. The project was, in many ways, a reaction to the gloomy mood hanging over Dublin.

‘We both arrived back from working abroad and were really frustrated with the way the city was being represented – bleak, empty and finished’ says Flaherty ‘For us, the things that made Dublin truly special were still there to be celebrated – its people, its stories, its humour and charm. We couldn’t find work and so we began Storymap as a way to use our skills to showcase the real cultural wealth of Dublin, in a way no-one had ever seen before. The support we got from people amazed us – writers, historians, artists, actors, barmen – all gave us their time, their stories, and their support to build this ’.

As well as presenting the stories mapped to location for the user to discover, the App includes a series of incredible innovations.

•   Rambles: The stories are collected in eight themed routes across the city, each offering a different flavour of the city’s life and history. It’s the equivalent of eight walking tours in your pocket.

•   The App also has the ability to generate a ‘ramble’ based on any destination and so transform a simple walk across the city into an engaging and entertaining experience.(For example, if  you’re on Henry Street and have to meet someone at the Guinness Storehouse, you can simply tap in your destination and a ramble will be generated which links stories along your route).

The stories on offer are just as diverse as the storytellers.  An exclusive story from Roddy Doyle skillfully brings to life a girl’s anxious wait at The Spire in a wonderfully evocative tale. Doyle said of working with Storymap “I loved the experience, seeing how Storymap took my words – all 155 of them – and, almost literally, built part of O’Connell Street with them.  It was clever and moving and, as I watched, I felt proud – and very grateful.”

There is a treasure trove of historical oddities – from the massive explosion on Wood Quay that killed off one per cent of the population of Dublin to the French gangs of the 18th century, The Liberty Boys, whose violent feud with The Ormond Boys often brought the city to a standstill.

Old memories of Dublin and its characters abound, and the most popular story features two Dublin gents, The O’Neill brothers, recounting their lives and loves in Fallons bar, ending in an impromptu song. The cartoonist Tom Matthews regales the viewer with an hilarious account of his lifelong love of the ‘Why Go Bald?’ sign, and how it’s served him down the years. Comedians, artists, musicians, poets and writers all add to this kaleidoscope of Dublin life, which constantly surprises and entertains. 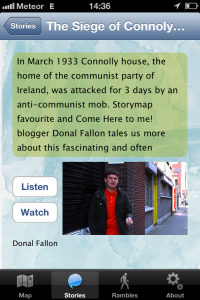 The App was developed at the Dublin Institute of Technology by Jamie Osler and Eoin Rogers, and overseen by Bryan Duggan. It is on sale in the Android and iPhone app stores for €2.59. Using their fanbase in Dublin, Storymap crowdfunded the initial funds through the innovative funding website fundit.ie, and then supplemented this with funding from Enterprise Ireland. The resulting App is an invaluable resource for Dubliners who want to explore their city in new ways, and also for tourists hoping to have a genuine and authentically local experience of Dublin. It is also great fun, and will bring a smile to anyone who uses it.

“A lot of the times when you’re traveling as a tourist, it can feel like you’re on the ‘wrong side of the glass’ and not able to access the real life and culture of the city’ explains Rowley “And with our app we wanted to provide a tool that would let a visitor to Dublin to feel a real connection with the city through its people and stories. Tourism research shows a huge desire from modern tourists for an experience that’s authentic, unique and where they have the freedom to explore the city through their own tastes and interests. With the Storymap app we’ve created the ideal product for this new type of tourist.”

The App launch is the start of a busy year for Storymap, with a number of plans for expanding in Dublin and to new cities internationally. Storymap are currently collaborating with Dublin UNESCO City of Literature to build a version of Storymap tailored to showcase the city’s literary heritage in a unique App and website, while they’re also planning to build a Storymap specific to the Dubline, a new walking trail concept,in collaboration with Failte Ireland. With interest from abroad the two filmmakers are aiming to bring the project to new cities, including London, Galway and Derry in the coming year, with further plans to establish the Storymap concept across Europe as a unique and innovative way to engage with a city.

For more information see a short video here and for a quick treat of a clip of the wonderful Bernie mentioned up above, see below 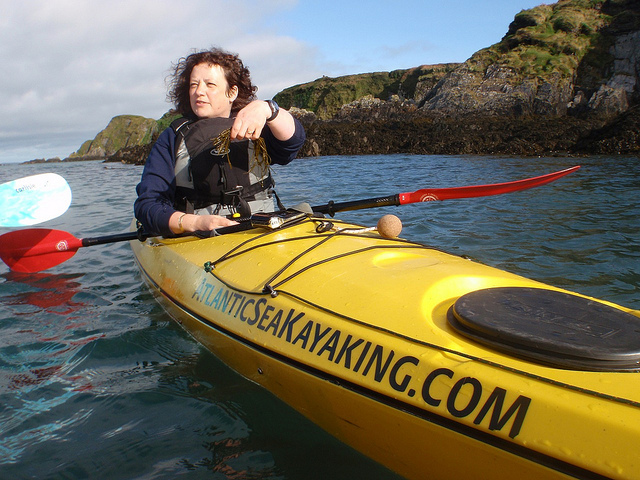 It is no secret that Ireland has some of the world’s finest weed. Not only that, it is in plentiful supply, cheap and and it’s a superfood. The weed is, of course, seaweed, and anyone who has had a seaweed bath will not need convincing as to its benefits.In terms of sustainability, seaweed is also a no brainer, and so it is exciting to see that the Inchydoney Island Lodge and Spa in West Cork has created a two-night “Seaweed Experience” package which has you living and breathing the stuff. And not just within the confines of a spa either.

Realising that many people are now looking for a low-impact, green, activity-based break, not just a lie in the spa, drink and eat all weekend sort of a break, Inchydoney may inspire others to follow suit and get their guests teaming up with local, green activity providers, nature experts and guides.

Inchydoney has picked two of Ireland’s best: expert kayaker and local marine life font of knowledge, Jim Kennedy of Atlantic Sea Kayaking, who brings guests out on local waters alongside Sally McKenna, of the Bridgestone Guide fame, who has successfully combined her food knowledge with a passion for paddling to bring people seaweed foraging.

Over the duration of a day on the water, I learned kayaking skills with Jim, whose sense of humour and reassurance that kayaking is a gentle sport for all ages, and not for adrenalin junkies, immediately put me at my ease. He led me into hidden caves and coves and from island to island, pointing out seabirds and seals and keeping an eye out for dolphins. Suddenly, as we emerged from an explorative paddle, Sally would appear out of nowhere, full of child-like excitement about a certain kelp or wrack she had found, so we all paddled over to study it, harvest some carefully to allow regrowth, taste a bit, and learn about its growth patterns and healthy properties.

Sally’s love of this most underrated food source, from how it grows to how to eat it, was totally infectious. We stopped for lunch on a deserted island, where she prepared dulse and potato soup, served with scones made with laver seaweed and served with dulse and lemon butter. All merited a Bridgestone plaque, I should add, not forgetting a kelp and carrot cake. By the end of the day, I had noted down all of her seaweed recipes, books for further reading, and vowed to bring my kids foraging as soon as possible. You’ve got to watch this weed thing, it’s addictive.

Day two at Inchydoney fed my addiction even further, except that this time it was me who was covered in seaweed (a dried version combined with green tea), then wrapped up in heated blankets and left to cook for 20 minutes. Then into a seawater massage bath, with jets to discover all those coves you never knew existed, followed by a couple of hours flitting between Inchydoney’s heated seawater pool, steam room and jacuzzi. All topped off with a walk on Inchydoney’s famous

white strand, close enough to walk barefoot from our room with a view of the Atlantic.

But really it was the day of paddling and exploring, learning and laughing out on west Cork’s waters which makes this trip extra special. It is not surprising that Atlantic Sea Kayaking was recently chosen as one of Trip Advisor’s Top Ten “Most Exciting Alternatives to the Typical Tourist Holiday”. Fair play to Inchydoney for celebrating and supporting such an ethical activity provider, and bringing them to the attention of those who might not otherwise find the world that awaits them, beyond the spa and into a world of bladderwrack bliss.  You can also watch a video of my (sorry it’s a bit windy) experience here.