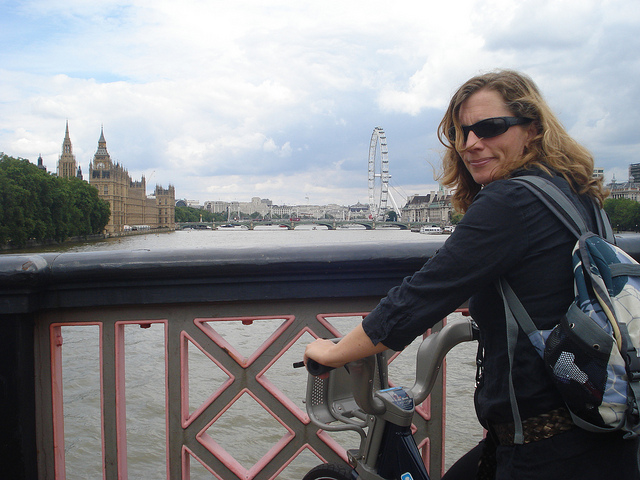 London has finally caught up with neigbouring capital cities, Paris and Dublin, and launched its own bike hire scheme, organised by Transport for London (locally known as TFL).

There are four hundred docking stations around the city centre, housing six thousand bikes, so this is a fairly ambitious attempt to keep up with the Joneses. I had a quick preview run last Sunday cycling up The (traffic-free) Mall to Buckingham Palace, down the South Bank, back over Westminster Bridge and around London’s green heartlands of St. James’ Park, Hyde Park and Kensington Gardens, and I loved it.

The London scheme is more expensive than many other urban bike hires: the first half an hour of bike hire is free (well almost, you have to pay a daily access charge of £1 – no such thing as a free lunch anymore), then £1 for an hour, going up to £35 for six hours. So they are not aimed at long term hire, just for short trips across the city. However, according to TFL, you can dock it after half an hour, wait for five minutes and take another one for half an hour, and go free wheeling all day if you like, if you have the energy to plan that.

Planning your cycle route is made easier with Transport for London’s map of all the docking stations.  TFL’s website is invaluable anyway for planning your journey, but especially for cyclists. Either go straight to the docking station map or,  to plan a more precise route from one postcode to another, go to their general Journey Planner and put in your starting point and chosen destination. Then go to ‘Advanced options’, scroll down to ‘cycle’, and you will get a map of the best (and traffic-light) cycling route. You can also get a map of the docking stations on a new iphone app. It is worth noting, however, that for the first four weeks of the scheme, only registered members can use them, and you need a UK address to do that. After this preliminary period, they will be available to non-residents.

If you are going to do some serious long-distance cycling in London, I would hire a sportier, sleeker model than the one being rapidly nicknamed The Boris Bike, after the Mayor who launched it – which is a bit big and bulky. The bike that is, of course. For example The London Bicycle Company at Gabriel’s Wharf on the South Bank hires bikes from £3.50 per hour, or £20 per day. And,  unlike Boris, they’ll give you a helmet and a lock. You could join one of their guided cycling tours of the city or,  if you want to be more independent, buy The London Cycling Guide by Tom Bogdanowicz (New Holland, ISBN: 978 1 84773 5461, £10.99). Full of maps, descriptions and low traffic routes, as well as links to rail and underground stations.

I have two favourite cycle days out in London: first, put the bike on the train at  Waterloo station to Richmond, where you can head to the Thames Path and cycle about 10k to the stunning Hampton Court Palace, with a few lovely riverside pubs en route. or second, put your bike on the Thames Clippers commuter ferry at one of many city centre moorings, and sail to Greenwich. Then cycle up through the Royal Park of Greenwich (stick to cycle routes only, or you will get get a fine) to The Observatory, enjoy one of the city’s best views (sunset is superb here), and then cycle back into the city centre following the Thames Path and quiet backstreets again. Towards the end of this journey you turn a corner and Tower Bridge is suddenly there, right in front of you. These are what I call  ‘Loving London’ moments and,  no matter which bike you plump for, seeing it from a saddle is, surely,  the way to go.

An edited version of this article, by Catherine Mack, was first published in her column, Ethical Traveller, in The Irish Times