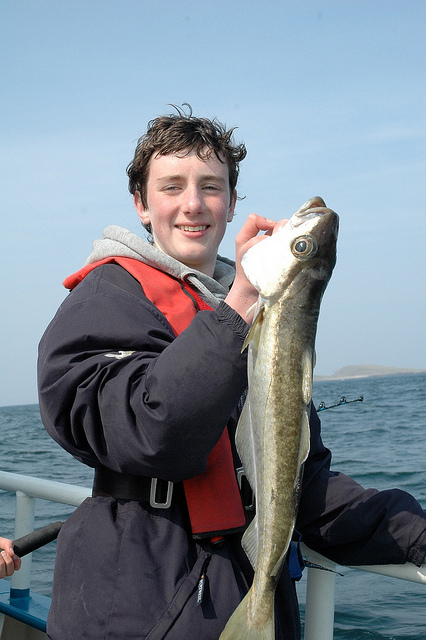 There is a growing trend on Twitter for #PostiveIreland entries: stories of Irish people who are turning recession and depression into a renaissance of creativity and resourcefulness. This is as tangible in tourism as anywhere else and Dúlra Nature Tours in Erris,CountyMayo, is a gleaming example of new, exciting forms of tourism, which brings us back to nature and our fine local resources.

Belmullet fisherman Anthony Irwin has teamed up with partner Angela Healy to create a ‘Catch and Cook’ weekend off that spectacular stretch of coast which is, sadly, more associated with the local disputes with Shell than sustainable tourism. There was no thought given to politics this weekend, however, as we left Blacksod Pier first thing in the morning, and headed out into the Atlantic on board Dúlra na Mara for a day of adventures. After about an hour, during which our skipper, another local Simon Sweeney, shared the history of islands which passed us by, we found a good spot and had a quick angling lesson. Within minutes the waves were echoing with cheers as, one by one, we pulled in buckets full of Mackerel and Pollock.

The Dúlra team are not just fishermen, however, they are also expert nature guides and cooks (this is where Angela steps in), ensuring that our lunch stop on the white sandy beaches of deserted island Inis Ge wasn’t short of a good story or a fine bite to eat. Once a hive of activity when it was home to a whaling station (closed in 1914, thankfully), wildlife thrives here now, home to Barnacle Geese in winter, nesting seabirds in spring, and seals all year round.  Lunch was equally impressive in its wildness, a fresh fish and pinto bean stew, scones made with duileasc seaweed and homemade bread. All devoured from our perch overlooking the tiny harbour with its well preserved stone cottages, now only used by ex-residents who come back to holiday, and the sheltered calm, clear waters.

There was nothing these lads didn’t know about the island, especially the best bird watching points, as they led us up over the hills to the far side of the island, past the architectural wonders of 18th century navigation towers, over the old lazy beds which villagers had cultivated, to the windy cliffs which are home to hundreds of nesting Fulmars. We were gently encouraged to crawl to the edge and lie on tummies. Anthony was made to hold onto my feet, however, as I am such a wimp, but boy was it worth it. For about twenty minutes we all just lay there, mesmerised by the magic of these mothering seabirds, as they swooped back and forth protecting and nurturing.

Back on board, and after a bit more fishing, we were heading back to the mainland, when Anthony handed my youngest son the binoculars. “Dolphins!” he yelled, and within minutes, engines off, a pod of beauties was surfing our bow. A definite Twitter  #positiveireland moment, where you can also check out my video of it all.  A more than giddy bunch of adults and kids were then minibused back to the luxurious self-catering house which was home for the weekend. The only difference is that there is nothing self-catering about it, as we arrived back to a gourmet fish feast prepared by Angela, and added to by us, our catch proudly held high. But not before we were taught to fillet it and prepare it first. If this doesn’t

have your kids eating fish, nothing will.

The adventures continue into the next day with a walking tour around Erris Head, mussel and seaweed foraging and more gourmet gorgeousness back at the house. The house, by the way, is an impressive sustainable timber frame design, built by Anthony. Is there nothing this dynamic duo can’t do, I wonder? They are so charismatic, creative and committed to their region and its sustainability, I have a feeling that you should book in quick, as someone with any sense will try and snap them up for a TV series. Accommodating ten, this is the perfect ethical corporate  break, family reunion, or big birthday bash, or just go for a one day option, if you have accommodation somewhere else in the region. Although, nothing beats catching, cooking, eating, drinking and then just collapsing. Watch a video our memorable family day out here. This article was first published in The Irish Times