There is a growing network of travel writers committed to responsible and green tourism. Rooksana Hossenally is one of them, and so I am delighted to have her write a guest blog on this site – introducing We Love Green Festival, this coming weekend in Paris – and  Rooksana – whose writing we also love…..

The environment has become big business for some, and a way of expression for others. Finding a page dedicated to green issues once in a while in your local paper, or favourite glossy, is now the norm, but something that stands out from the rest is the annual We Love Green Festival.

Now in its second year, it is the first festival with the environment at its core. The Paris-based three-day event, We Love Green, is an appeal to our awareness of our impact on the environment via live performances by artists like Norah Jones, Charlotte Gainsbourg, James Blake, the Klaxons, Beirut and Django Django, but also through a series of stands manned by various local environmental associations and several workshops. Because let’s face it, we know how to sort our rubbish into different piles now, but what else can we do with it? Leaving out the ‘here’s one I made earlier’ Blue Peter edge, no one’s going to ask you to stick two toilet roll tubes to empty yoghurt pots, which will magically become a dolls’ house for your nieces. No we’re talking scenography workshops using reclaimed materials to create furniture and signage already in gear for the festival kick-off in a week’s time.

Like at all festivals, there will be several stands of food, clothing, and all sorts, including a place you can charge your phone by pedalling on a bike, a group of ‘pixie’ hairdressers who will be making sure everyone’s barnet is styled for the occasion, the Starck-designed Volteis V+ buggies will be seen carrying artists and equipment from one end of the site to the other, various art exhibitions will be happening, as well as green design inventions revealing future possibilities of bettering the way in which we use the planet’s resources. The ‘Green Peas’ area will be up and running, educating children of all ages about the impact each one of us has on the environment through a series of workshops and games. Also part of We Love Green, don’t be surprised to see, among the park’s century-old trees, a somewhat different type of green: Heineken green. Okay, so the beer brand is more dollar-green than grass-green, but this is a festival after all, and what festival would be, without beer? And although no one’s pulling the wool over our eyes about We Love Green being another marketing ploy for the brand, Heineken, will be hosting a key part of the festival with its ‘Green Room Sessions’. Located in its own leafy wooden contraption it will provide another area for festival-goers to enjoy the spirit with a jukebox playing sounds from the psychedelic tunes of Django Django to the folk rhythms of Beirut.

However, household consumer brands like Heineken and Philippe Starck aside, We Love Green has positioned itself as an experimental crossroads for exploring new ideas. And like at its first edition last year, the ‘Green Team’ will be onsite to distribute earplugs and disposable ashtrays. Water fountains will also adorn the site providing free water and saving on plastic bottles. This year however, the team pursues its goal of creating a festival that is 100% green by composting all waste generated during the event. Even the recyclable tableware the food stands use will go on the heap. The clan will be teaming up with the association, OrgaNeo, to test a composting system that relies entirely on worm activity. The bulk of waste generated by the festival will be carried off to a factory in Dreux, a neighbouring region, where composting can be done on a larger scale. 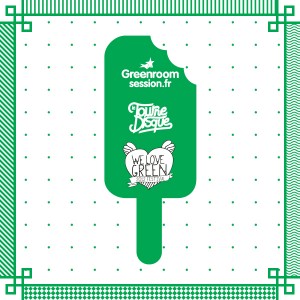 A festival anchored in present-day issues, which the Because.tv clan holds close to their trendy hearts, We Love Green is a ‘disposable’ festival; it doesn’t impact the land it occupies nor does it disturb the park’s eco system in its logistics. Running partly on solar energy, it is a festival that questions the resources that we have and what can be done with what we have as opposed to living on borrowed resources…borrowed because if we continue to live beyond the means nature offers us at the current alarming rate, it is only be a matter of time before the reality of an Earth stripped bare really hits home – quite literally. So We Love Green is still a festival and it’s still fun, and the Green Team knows there is still a long way to go before We Love Green can be a fully functioning paragon for future festivals – but it’s a damned good start.

We Love Green will run from Fri 14-Sun 16 September 2012 at the Jardin de Bagatelle, Paris 16, France. For full details see the We Love Green website (in French only). Tickets are available here (free for children under 12 years old).

I know that Paris for Valentines is a cliché, but it is so easy to fall in love there. As an ethical traveler, I am also in love with Paris. Living in London I am spoilt, as I can take a train to get there, with no better start to a trip to Paris than on the Eurostar. Quick glass of bubbly at the champagne bar in the magnificent Kings Cross St. Pancras International station, and three hours later you can do the same thing in the centre of Paris . If you haven’t done it yet, it’s worth a trip to London just to experience it.

For eco-friendly accommodation, stay in a wooden lodge surrounded by forest in Versailles, only twenty minutes by train from central Paris . It’s run by my favourite eco-campsite Huttopia (www.huttopia.com), and for €105 per night, you can watch the sun come up in the morning from your wooden decking, and zap in on the train to watch the Eiffel Tower light up in the evening. Then back to the warmth of the lodge’s wood-burning stove.

If you prefer hotels to ‘huts’ then one hotel chain to check out is Accor. It won a French Responsible Tourism Award in 2008 for its sustainability practices. Its beacon hotel is the Novotel Gare de Montparnasse, the first Parisien hotel to be given the High Quality Environment label, ensuring better insulation, energy-efficient lighting, good waste management, low water and energy consumption, and ecological materials such as carpets, wood and paints (www.accorhotels.com). For a less pricey (and less central) option, the Accor Group’s Ibis Hotel in Porte de Clichy has installed solar panels to take the edge of its energy consumption.

For green travel, Paris je t’aime. Hire bikes at Huttopia to explore Versailles and the surrounding forests, or make the most of the city’s exemplary new cycling venture, Velib. This enables you to hire one of  200 000 bikes dispersed over 1450 terminals just using your credit card, with the first half hour free of charge (www.velib.paris.fr). The ‘Paris Respire’ ( Paris breathes) scheme has closed some of the city’s main arteries to motorised traffic on Sundays and public holidays, such as sections of the left and right bank along the Seine. This is people watching heaven by the way, with an eclectic mix of Parisiens showing us how to saunter in style.  For more details on these and other cycle routes see www.paris.fr.

Non-cyclists can cuddle up in the back of a Cyclobulle, an electric chauffeur–driven tricycle company based in Rue de Cléry in the 2nd arondissment. Travel from one central location to another, or pay €19 for a thirty minute guided tour (www.cyclobulle.com). Ask them to drop you at one of the city’s organic farmers’ markets (‘bio’ in French), such as Boulevard Raspail on a Sunday morning, or Boulevard Batignolles on Saturdays. The Saturday morning market in Saint Honore in the 1st arondissement is small but very central and does usually have a few organic stalls.

Taste the real thing ready made at one of several good restaurants specializing in local and organic produce. You can shop and  snack at Biotifull Place, on the first floor of the Printemps store on Boulevard Haussmann or, if you are heading for Notre Dame check out Le Grenier de Notre-Dame. Le Potager du Marais is good if you are exploring the area’s famous boutiques or, in the Oberkampf district, Alter Mundi’s Fairtrade and organic deli and café is the foodie bit of its ethical shopping chain (www.altermundi.com). Bioboa is a good veggie-healthy watering hole after walking the streets of the Opera district. For details of these and more (and markets) see www.nouveauxrobinson.fr. It all just gets your juices flowing, really. But that’s Paris for you.