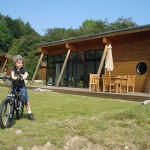 They say the camera never lies and the website photos of these designer wooden lodges, tucked into the Yorkshire Dales like birds nests were, indeed, enough to make my jaw drop. As we approached along an almost deserted road in one of England’s northernmost National Parks (despite being the height of tourist season), the Kevin McCloud wannabee in me was almost biting at the bit to see these cedar creations.

Natural Retreats is aptly named and their grey slate sign, set subtly into the dry-stone wall, was so natural, we almost missed it.  When we took the sweeping driveway down to the retreat, I thought I had missed the houses too, as there was nothing to be seen at first. Then my husband let out a gasp as he spotted the bronze-coloured wooden structures in the valley below, peaking out sporadically between the pines and ferns.  This had been no Photoshop job, for sure. They were gobsmackingly gorgeous, to use a technical term. Our children, two boys of five and nine, jumped out and ran down the hill in a Sound of Music meets Emmerdale sort of a moment.

The hills stretched out before us, dipping into valley after valley, wildflower-filled hedgerows concealing hay bales, perfectly placed as if posing for a painting. Views like this usually bode well for a holiday, Yorkshire, towards the east coast. I know the tradition is to book into the place with a bath after the camping holiday, not before, but we were in bits after recent work stresses, and thought that a couple of days to unwind before tackling any canvas and poles might be a good idea.

but we had only booked for two nights, en route for a camping session on the other side of

We were reassured the minute we stepped inside our wooden house, with its floor-to-ceiling glass windows, gleaming white walls and designer sofas, open-plan kitchen, wood-burning stove and bedrooms which had nothing spared on five-star luxury. We opened our complimentary bottle of wine, part of a welcome hamper of local and Fairtrade goodies, and raised a glass to the best start to any camping trip.

There are eighteen of these wooden houses, so carefully positioned for minimal impact on this protected landscape, that I couldn’t find them all. Even using one of the walking maps, specifically designed for Natural Retreats, I am sure there was still one or two lurking behind a bit of woodland somewhere. Ours was one of the more ‘public’ ones, at the foot of the woodland, beside three natural ponds, developed out of the natural spring which provides water for the site. We had moorhens and herons for company, as well as a few frogs to keep our boys happy, as they watched them jump from one pond to another, and then dart under the houses. This was all part of the ecodesign, as the houses are built on wooden decking, which in turn is placed on three strips of concrete, in order to maintain a natural living environment underneath. The roofs are alive too, covered with sedum-moss which was turning a soft strawberry pink, as the wild flowers came to life.

There were a few other houses beside us, which was great for the children, who immediately made friends and were cycling from house to house within minutes. Public or private, you won’t be spending much time inside your hideaway, as the countryside seems to pull you towards it like a magnet here. This was the aim of the landowner and sheep farmer, Matt Spence, a self-confessed ‘National Park addict’. He rightly wanted to show off his homeland, in a way that was not only kind to his beloved Swaledale, but also contemporary and classy. He has certainly pulled this off.

Natural Retreats was criticised recently for branding itself as ‘eco’ and having Tropicana in its welcome pack. Yet, that journalist omitted to mention that ecotourism is also about community development. Natural Retreats has reeled Yorkshire Dales tourism into the 21st Century, and will entice a whole new generation of tourists to this area. They work hand in hand with, and have gained huge respect from the local community. The welcome hamper (the Tropicana well and truly gone) is from the local grocer, Ken Warne, whose wonderful shop we visited the next day. He is one of those grocers who wears a dark green overcoat, and has the most eclectic range of fine produce on his shelves to meet the demands of his adoring Richmond clientele, and on the verge of closing before Natural Retreats passed the hamper business onto him. Just about everyone employed on this 54 acre site, from managers to master joiners, drystone wall craftsmen to furniture designers is local. Ecotourism is not all about eco-friendly lightbulbs, recycling, and woodburners. Although all these are on offer too.  Not forgetting the natural insulation, rainwater harvesting and wood management system. Solar power was not allowed on planning grounds unfortunately, although the passive solar heating from the huge windows is enough to dry your walking boots after a few hours.

Walking into the local town of Richmond was absolutely the best way to sample the Dales in a day. Described as a twenty minute walk into this buzzing Georgian market town, you will be lucky to do it in this time, unless you are totally unmoved by the scenery en route. Which is unlikely. We took about three hours, mainly because we stopped along the banks of the River Swale to plunge into its icy waters, and swim from one riverbank to 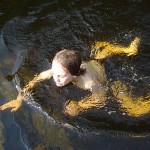 the other, where someone had kindly hung a ropeswing.  Then on through glimmering glades right up to the towering cliffs which support the impressive remains of Richmond’s Norman castle. Boy heaven. After a tour of the castle, a must for views all the way across to the North York Moors, we had an early dinner at the town’s converted railway station, Seasons, where Yorkshire rarebit or Whitby fish and chips is highly recommended for swimmers and knights.

We had only two regrets at Natural Retreats. One, that we hadn’t gone the whole natural hog and come by train. You can take the train from Holyhead to Crewe, then Manchester, and, finally, the stunning TransPennine Express all the way to Darlington, the nearest train station, only a 20 minute taxi ride away, and arrange for mountain bikes to be delivered to your door. The other regret was, quite simply, that we hadn’t booked for longer.

A 5 night stay at Natural Retreats starts from £880 per residence, sleeping six.  There is a 2 night minimum stay, from £325. Price includes accommodation, a food hamper on arrival, logs, linen and towels. For more information Tel: +44 (0) 161 242 2970 or www.naturalretreats.com

(This article was first published in The Irish Times, 30 August 2008)