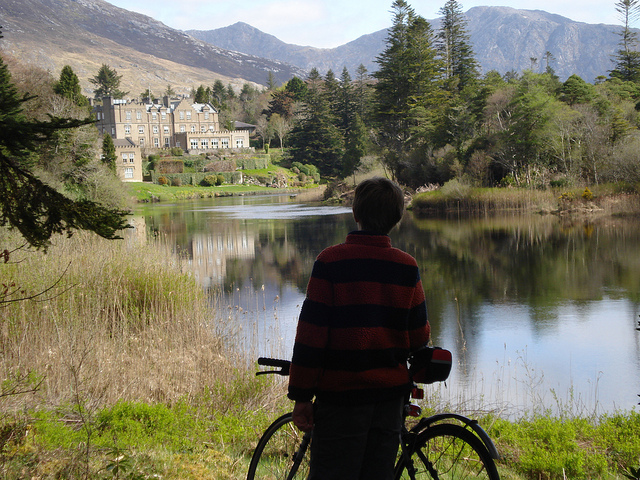 Not only has Connemara’s Ballynahinch Castle Hotel got sixty five candles to light for its current birthday celebrations, but it has close to that many ethical flags to fly too. With a heart stoppingly gorgeous location overlooking it’s own (Ballynahinch) River and Lake, with grounds which drift seamlessly into the foothills of the Twelve Bens Mountains, this is a hotel which takes its extraordinary position seriously, treading lightly throughout.

With the river and lake at it’s heart, the hotel’s Estate Manager, Simon Ashe, talks passionately of his team’s Catchment Management Programme to conserve vital fish stocks, as well as their campaign against fish farming and drift nets. So far, they are winning their ecological battle, with salmon stocks doubling since the closure of the Irish drift nets fishery in 2007. You certainly have plenty of opportunities to sample the unforgettable flavours of fine, fresh and wild fish here, with lemon sole as the catch of the day on my breakfast menu, which gets you off to a good start on any holiday.

The aptly named Ashe has also been responsible for planting over two thousand trees on the estate, and visitors who want to contribute to this woodland management scheme are given a certificate with their tree’s GPS coordinates, so they or their families can locate it in years to come. These are not the tokenistic gestures which the growing green trend in tourism has witnessed in some hotels, where tree planting, for example, can sometimes be a mere tick boxing exercise. Ashe, who knows every tree, shrub, wildflower and weed on his estate, has also opened a disused well to supply the hotel’s water, including beautifully bottled water for the rooms, installed a giant wood chip burner and solar panels to create the hotel’s energy, and has an impressive recycling facility.

the hotel’s grounds as a looped woodland walk, with boardwalks covering fragile ecosystems, allowing access to bits of Ballynahinch’s beauty which you couldn’t reach before. A clever move, as there greater plans for a Connemara Greenway, similar to Mayo’s Great Western Greenway, using the same old railway line and nearby lanes as an off road cycling and walking trail, within the next year or so. You can already make the most of stunning cycling in the area, as bikes are available for guests’ use. With Roundstone just a few kilometres away, you can cycle to the sea and back before breakfast, if you’re keen.

Ballynahinch Castle celebrates everything that people used to come to Connemara for. They have a full time walking guide on staff now, Noel Joyce, who will take you just about wherever you want, be it just around the grounds to give you a history of the trees (and their planters) or into the mountains where Noel will regale you with his knowledge of the Gaeltacht and it’s social, archaeological and natural history.

One other thing which really sets Ballynahinch apart for me, however, is its genuine passion for Ireland’s cultural heritage. Des Lally, who described himself as the ‘night porter’ the evening we arrived, was not only top of his game in terms of hospitality and warmth, but I was then to discover that he is co-editor of a beautiful book of poetry recently published by Occasional Press, in association with Ballynahinch Castle, called “An Afterglow: A Gallery of Connemara Poems”. That’s Ballynahinch for you. The hotel is brimming with local artwork and fine books so, all in all, no wonder many of our leaders in the arts are coming to the hotel to take part in their birthday celebrations, with various events planned throughout the year. Their latest publication, the stunning  A Connemara Folio” by Donald Teskey,  is a collection of eminent artists’ visions of Connemara.

Ballynahinch manages to wear its achievements lightly, however. It’s neither flash nor fuddy duddy, and welcomes everyone in through its doors to join what feels like one constant house party, birthday or no birthday. So, if you have a treat in mind, go help blow out the candles this year, and raise a toast to effortless ethics, carried out with exemplary commitment and class. For more photos see my slideshow on Flickr.