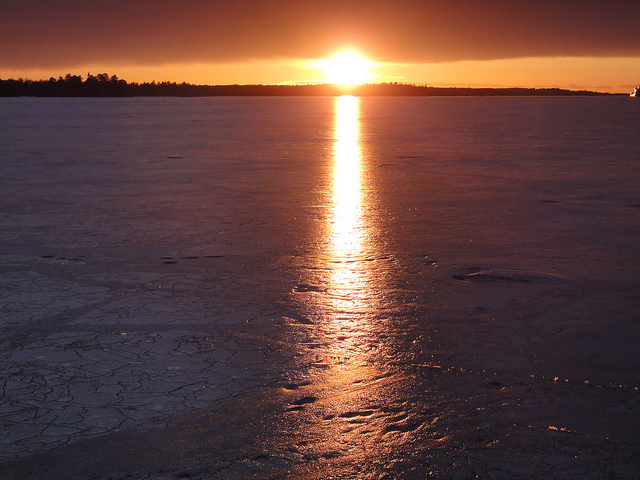 I take my first steps out onto the frozen waters of The Baltic and my legs lock with fear. All that practice on the Christmas rink feels like a futile flirtation as my Swedish guide gently urges me to put my trust in the long metal ‘tour skating’ blades and just slide. Only weeks previously I had been proudly circling the rink, feeling all crisp and carefree, and now here I am, on the precipice of Swedish serenity, and I can’t seem to put one bleedin’ blade in front of the other.

It isn’t helped by the fact that my best mate Simon, who had reassured me he could hardly skate at all, took off with all the other Dutch, Swiss and German skaters on this guided tour of Sweden’s frozen archipelago and lakes. There are two guides, John and Christine Savelid, father and daughter, the latter patiently holding back with me as I await my Torvill and Dean breakthrough moment.

Our trip started a couple of hours earlier, with John showing us maps and trails at our hostel accommodation in Trosa, just 60kms south of Stockholm. After distributing special boots, designed to attach to the skates, we headed to a nearby jetty for our equipment training. This included a backpack which was to act as a buoyancy aid in the event of us falling in; crampons to stick into the ice…. in the event of falling in; and a rope to throw to anyone, in the event of them, yes, falling in. I think I had lived in denial to that point, but when John admitted that last year he was the first one to fall in,  I could feel the fear starting to rampage through my body. I looked around and everyone else was smiling, donning all the accoutrements and, within seconds, skating. While muggins was still on the jetty having a minor strop with straps and safety stuff.

Attaching the blades to the boots was straightforward and, finally, I eased myself gently onto the ice. This, however, was thanks to two walking poles which the other skating swans use to just boost their speed, while this duckling uses them as crutches to ease myself in the right direction. It’s when the ice starts to crack in front of me creating multi-levelled crevices across the surface that reality hits, my legs lock and I hit the deck. And again. And again. And reality hits hard on the ice, bruising hips and hubris in equal measures.

Christine just smiles, reassuring me that the cracks which appear sporadically, taking off across the surface like silver snakes in all directions,  are normal. They are just on the surface with at least 30cm of solid ice underneath , she tells me, poking her pole to test the ice all around as we slowly make progress of some sort or other. Some of the ice looks a bit slushy to this total wimpy amateur, and so I stay well behind Christine and don’t err from her tracks. I have chosen the end of February for my visit – the end of the ice season really, which usually starts around beginning January. But with tracking technology, our guides are in constant communication with other skaters, who keep them updated on conditions. We stop after a couple of hours for a picnic lunch on the tiny island of Fagelo, my arms aching from pole pushing, while the others don’t seem to be even out of breath after their 20 km circuit.

Simon, on seeing my frustration, pours some brandy from his hipflask into my hot chocolate.  It must have given me the Dutch courage I needed, however,  as it all starts to click into place after lunch. Christine smiles as I take my first real glide, lifting one leg off the ice for several seconds at a time while moving forward on the other.  I almost weep with relief and at last, I actually start to look up and see the extraordinary sights around me. A scene so beautiful, it feels as if Mother Nature freezes it especially, just so that we can view it in this perfect state for as long as possible.

Lake Malaren is a vast waterway heading inland from Stockholm and home to thousands of islands, some just offering a quick protruding rest point, and others protected nature reserves.  It’s like a giant obstacle course on ice, with twisting bays, wide open tracks and old lighthouses to shimmy round. As we follow the coastline west from Skabbholmen Island for about 16 kms , into the sunset, the fast guys lead the way, their skates creating an illuminated runway in the distance, as the metal regularly reflects the last rays of the day. For the next two days I just glide through a frozen, fragile wilderness, moving further West to Eskilstuna, where the ice just gets more mirror like in its smoothness. Christine and I still skate behind the others a little, taking things at a gentle pace until the moment when she stops to prepare me for a new bay up ahead, where the wind changes direction. ‘For this one, just lean forward, put your hands behind your back and let the wind take you’ she says, and off I go in full sail. As two swans take flight beside me, the first sign of life in ages, we soar down the shoreline together, Ravel’s Bolero beating in my head in time to their wings.

The only other signs of life are a couple of other skating groups, many of whom are Dutch who travel North to keep up their cultural tradition, with climate change warming up the waters back home. They skate into Sweden in droves, grieving the loss of a sport which has been close to their hearts for generations. And grieve they might, because in 2009 the Netherlands Environmental Assessment Agency gave a rather pessimistic outlook claiming that,  given current climate trends, the race was only likely to happen every eighteen years, compared to every seven years during the last century.  These Dutch are confident skaters too, speeding close to the edge of the ice at one point to greet an ice breaker cutting  its way through, its wake creating enough of a gentle movement far beneath for me to cling well to the shore. We also met  a few local people fishing on the ice, drilling through with a small hand drill, and sitting on a stool for hours jigging a small rod up and down – this is how wealthy Stockholmers enjoying weekends at their island cabins, apparently, fishing by day and warming up in their waterside saunas by night.

We too get to enjoy a sauna back at our second hostel in Eskilstuna. This is Swedish starkers style, so be warned, but it is well worth it, as my hips are feeling the strain of several, albeit less than the first day, falls. The other thing to be warned about is the lack of alcohol to ease the evening fatigue. Our group was a bit of a surly ‘we’re just here to skate’ brigade, so Simon and I take off to imbibe duty-free like naughty school kids skipping ‘lights out’.

But in fact, ‘just skating’ really is enough to make this trip one of the most memorable of my travelling times. The joy of gliding never dissipates, whether it is out into the open waterscape or along reed protected coastlines. On the last day we have our ultimate ice experience, however, as we travel to Lilla Blacken on the North side of Lake Malaren to skate a circuit of 30 kms. Here, from the minute we put our skates on, a series of booming noises start to echo around the bay. This is followed by loud groans being carried off in the wind, as if the giant creatures of the deep had been wounded in some underwater attack.  “It is just the ice starting to melt and move, and these noises only happen when the ice is really deep. It’s all good”, John reassures me, skating off with an elegance I had spent three days trying to emulate.  I follow, leaving my fears far behind me on the jetty this time, revelling in this trip full of sensory overload, and celebrating nature’s ability to keep us guessing …..and my need to just keep on gliding.

Catherine Mack travelled with Nature Travels, Tel:+44  (0) 1929 503080. £734 based on two persons sharing for three nights. Single supplement £39 per person for 3 nights. In addition to scheduled dates, 17-20 Jan 2013, 21-24 Feb 2013 and 7-10 March 2013, which are suitable for adults and those with some previous experience, groups of 4-8 persons can also book private tours on dates by arrangement, when the needs of less experienced skaters, families, etc, can be accommodated. For private tours, there are also options for different standards of accommodation and different board options (e.g. self-catering). Prices for these custom options depend on group size and are available on request .For more information on winter and summer holidays on Sweden’s lakes, see visitsweden.com.

There are surprisingly few places in the world where you can go ice skating in the wild for recreational purposes only. Here are a few options for whipping up a wild, wintery wanderlust  :