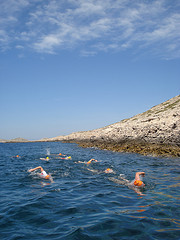 I look down at my hands pushing through the turquoise water and have a weird realisation.  They are exactly the same shape as my father’s.  I guess we rarely watch our hands in action, but here I am, twenty kilometres off Croatia’s coast, striding through the waves, and I have this bizarre hand moment. I have been swimming for an hour now, and have entered that solitary, pensive zone which only swimming helps me reach. Each stroke takes me back to early swimming days in the Irish Sea, when my Dad held on tightly to my hands, teaching me not to fear the water, but to let it carry me gently. “Go with the flow, and you will love it”, he would say, and how right he was.

I discovered Swimtrek, a holiday company which takes you on open water swimming trips in various parts of the world, about a year ago. Dreadfully unfit since having children, and with a bad case of middle aged malaise, I decided things had to change. While other friends tackled marathons, I headed for the pool, and started training in January for my first week-long holiday alone, no kids, lots of sunshine and, most importantly, the sea. I chose Croatia for various reasons. I hadn’t been there before, had heard great things, the swims were not as tough as some of their trips (average 3k) and jellyfish are few and far between in the Adriatic.

So here, at last, is the real thing. After five months of swallowing chlorine, being pushed aside in the fast lane, dry skin, verrucas and endless bad hair days, I find myself on the tiny car-free island of Prvic, a thirty minute ferry ride from the medieval city of Sibenik. This is just one of 1185 Croatian islands (of which only 47 are inhabited), along its nearly 6000 kms coastline. Prvic is base camp for the week, where a group of fifteen of us take over a local hotel, overlooking the shore. We are a mixed bunch and, despite all my anxieties, not the swimming club types who do endless arm stretches, slurp funny coloured drinks, and besport tight swimsuits which might as well say “I have absolutely no cellulite, and absolutely no life”. These were all real people, with wobbly bits, warts ‘n’ all. The only coloured drinks on show are beer or wine, and stretching is not recommended for open-water swimming, so I am safe. We range in age from late twenties to fifties, equally diverse in swimming experience, and are a good mixture of Swiss, Irish, American, English, Scottish, with swim guides from Finland, South Africa and Canada.

On the first morning we are instructed to meet on the beach, some proudly buck naked, bar Speedos, and others, like me, slowly peeling off sarongs before daring to dive. The guides assess our levels over a 200 metre swim, and then split us into three groups, giving us pink, orange or yellow swimming hats according to our level.  I delight at the fact that I am put in the bottom yellow hat group. No pressure, just go with the flow, remember. My Dad’s words are, however, long forgotten as I get off to a bad start on this first mini strike-out into the Adriatic, my chest tightening horribly, as I struggle to breathe smoothly.  “That always happens on your first open-water swim, it’s just anxiety, don’t worry about

it”, one of the pink-hatted “Speedophiles” (his term not mine) tells me, as he sunbathes just a little smugly back on the beach, not even out of breath.

But there is no turning back now. We jump on board our boat for the week, and Jadran, the Croatian captain, leads us out to nearby Tijat island, where the calm water is about 24 degrees, and the air about 32. We yellows are to take off first, getting a head start from the oranges and pinks. “Before you get in, I have to lube you up”, says Kate, our superfit Canadian swim guide, donning latex gloves and Vaseline.   We stretch out to have our sensitive bits smothered, so we don’t chafe. Salt water does strange things, apparently and this is, for sure, the most bizarre holiday ritual I have ever had to undertake.

Within minutes there are fifteen fluorescent hats bobbing along the coast of this stunning little island, its pine trees and white rocky shores disappearing past us as we swim. Within minutes, the oranges and then pinks disappear past me too, but rather than trying to compete, I stop and watch the impressive athleticism of my fellow swimmers. Each group has a boat following alongside, in case we need anything.  We have been taught some hand signals, including a ‘W’ sign, to let them know when we are stopping to wee. There’s no sign for chest tightness, unfortunately, which is still hovering, but I try to ignore it. By the time I reach the target lighthouse, just under an hour later, I realise I am ahead of my fellow yellows and, miraculously, still breathing.  Back in the boat, the guides hand me an orange hat, and I get cheers all round. As if by magic, the chest tightness disappears, and I am ready to take whatever the waves throw at me.

Later that day we are filmed swimming in the open water, which we watch back over beer that evening at the hotel, and given some tips. The next day I concentrate on putting all the tips into practice, and sail through a beautiful swim between the islands of Zmajan and Kaprije. This is our first ‘crossing’ as opposed to following the coastline. No more clear, shallow waters, this is the deep blue sea, with nothing but a pink cottage in the distance to aim for. But the sun’s rays which cut through the depths provide a guiding light of inspiration as we all eventually find a steady rhythmical pace over 2kms.

The feeling at the end of a swim is pure elation. I fall back into my meditative state on this crossing, only to be jolted out of it by the appearance of white sand, rocks and fish below me. This is when you realise that land is near, and lunch is waiting. No holding back on the food on this trip either, with divine spreads laid out on board of pasta, couscous or rice salads, cold meats, cheese and fruit. Jadran also spoils us on a regular basis, emerging from the sea with a load of Whitebait or mussels, which he throws in a pan with butter and garlic, and hands out like sweets. The crème de la crème is when he produces oysters. Just like that. He must be making some Croatian woman happy somewhere, I think to myself.

We take on two swims a day, totalling about 5kms, although the distance is irrelevant if the water is choppy. One day we head inland, up the Krka River towards the Krka National Park. We moor at the yacht metropolis of Skradin, and hike 4kms alongside a wooded gorge to the breathtaking Krka Waterfalls, seven of which gush down moss-covered steps, to merge into one magnificent mother of a fall, which finally hurtles into Visovac Lake. Here we join hundreds of other bathers, and bask in our first freshwater swim. The afternoon’s challenge is to swim 4kms back down the river, with the current carrying us most of the way. At least, that’s what they tell us, but I struggle here, fighting off a stitch, drinking most of the river in an attempt to find finding breathing space between the waves,  and slowly drifting from my group. Kate checks in with me; “Please tell me we are over halfway”, I beg, but I know by her face that she doesn’t  have the

answer I was hoping for.  I give in and slump back into the dinghy feeling sorry for myself. After a few words of encouragement, she drops me back up with the group, and I’m off again for the last two kilometres, still a battle, but I get there in the end.

Nights back on Prvic are never a dull moment. The guides book us a group table at a different restaurant most nights, where the food is always excellent, and the company superb.  Sea bass, tuna, sardines, mackerel and squid are regulars, eaten at restaurants so close to the water, you can almost fish for seconds. Some of the swimmers are able for copious amounts of Croatian wine, but I show my age and retire early most nights with a book. Having been carried by the hands of Neptune every day, I want nothing more than to sink ecstatically into the arms of Morpheus every night,

After the hiccup of my river swim, I decide to not let it set me back, and enjoy every swim from now on. I feel myself get stronger every day and, although I’m never head of the pack, I battle on at my own pace, encouraged by the determination of those just ahead of me. One of the most exciting swims starts just outside Sibenik harbour, where we head one morning for coffee, shops and “to clear a few heads”, says Mia, our other gorgeous swim guide. Back on board, Jadran drops us at the entrance to a sea tunnel carved into the cliffs by WW2 German occupying forces, which they used to conceal their boats and then surprise incoming enemy ships. We swim through the tunnel, sticking together tightly in this eerie hideaway, called “Hitler’s Eyes” by locals, and let the water carry us through like some sort of water theme park ghost ride. The light at the end of the tunnel reflects off the Adriatic, which then sucks us back along its glorious coastline for a few kilometres as far as another ancient sea construction, the 16h Century St. Nikolas fortress. Now derelict, we are able to wander around every corner of this imposing structure, with views across the channel we have just conquered.

Sadly, every good trip has to end, and our final two hour boat ride takes us out into the far reaches of Croatia’s sea

territory, the Kornati National Park. Here, cones of white rock, covered in sunbleached shrubs emerge from the water in their hundreds, creating endless reefs for us to swim around. There is no water on these islands, rendering them uninhabitable, but totally swimmable. We jump in and swim straight to the shoreline of one of them, which we cling to for nearly 3kms, following the underwater contours which conceal endless caverns and schools of fish. I enjoy every stroke on this last day, as  favourable currents help us along our last two swims of the week. As Jadran’s tanned, strong, hand reaches out to pull me back onboard for the last time, I hold it tight, and thank him for all his support during the week. And later that night, as we all toast each other’s achievements, I quietly raise a glass in thanks to, and in memory of, the strong hand which first led me to the water all those years ago.

Catherine was a guest of Swimtrek (www.swimtrek.com) and The Croatian Tourist Board

(This article was originally published in The Irish Times) 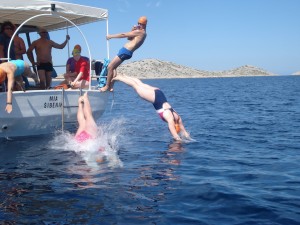 3 Replies to “Go with the flow, Swimtrek, Croatia”