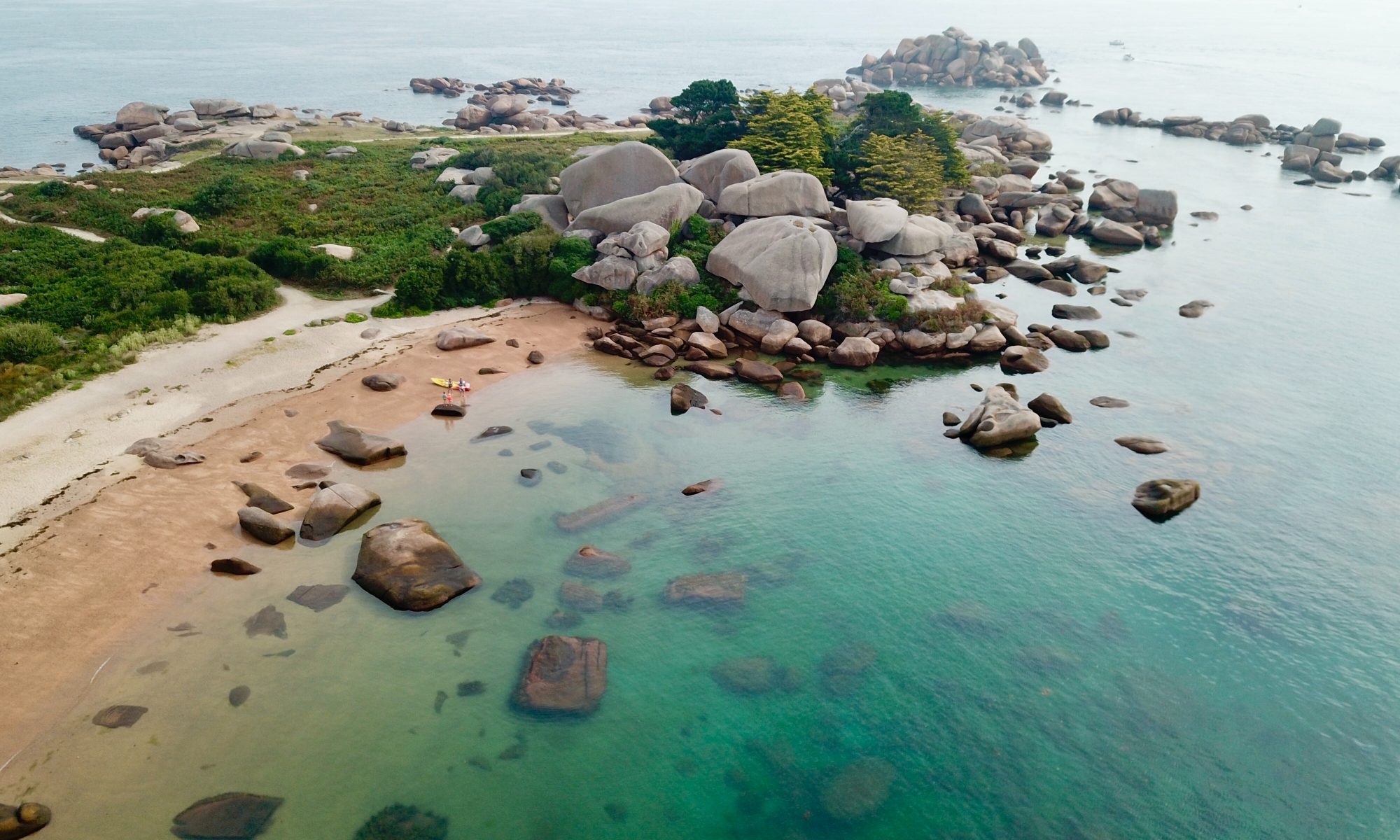 “Don’t forget to pack your umbrella!” a French friend laughed, somewhat smugly, down the phone from his apartment on the Cote d’Azur, when I told him I was going on a walking holiday in Brittany. But he had got to me, as I kept a fervent eye on five day forecasts and, finally, dug out my raingear. I felt bad as I had persuaded a good friend, Katie, to come with me, a mother of two young boys who had just packed in her night shift job, desperately needed some rest and, ideally, sun. I optimistically sent her Facebook messages to pack suncream and swimsuits, despite my Riviera rival’s mocking sneers still haunting me.

Even the name of our chosen section of Brittany was less exotic. The Côtes d’Armor, sounding almost militaristic in comparison to the azurian images of the Med, until we landed on its shores and realised that those Med Men have let the sun go to their heads. ‘Armor’ comes from the Breton, Ar Mor, meaning, quite simply, The Sea. They have no need to glam it up in Brittany. They just live and breathe the sea here, celebrating its dramatic coastlines and influences on local culture, rather than inviting celebrities in to pose on promenades or meander on moorings.

It was seven o’clock on a sunny morning as we walked off the ferry into Roscoff town, just a ten minute stroll past blue and white shuttered houses, down quiet Hydrangea lined streets into the pretty old port. At first we thought we wouldn’t find a café open but a quick stroll along the seafront brought us to the charming Café Ty Pierre, where a fine French breakfast, and very friendly staff, welcomed us onto their sunny terrace.

This self-guided walking holiday in Brittany was organised by Inntravel, a company which sorts out accommodation, itineraries, trains, luggage transfers and food, so that all Katie and I had to think about was getting the train from Roscoff to our first hotel, just half an hour away. With seamless organisation throughout, Inntravel couldn’t have picked a better starting point than the sumptuous 17th century Manoir de Troezel Vras, a family-run chambre d’hôtes stone manor house, all restored with minimal chic, boasting fine antique furniture and superb Breton art.

Restored by owners Jean-Marie and Francoise Maynier, their design skills were also on show in their gardens, thriving with covetable displays of both flora and food, giving them Jardin d’hôtes status as well. And with Jean-Marie’s extraordinary cooking, with scallop starters, followed by cod served on a bed of perfectly steamed cabbage, and home made crème brulee, he deserves a Michelin mention as well.

Our week’s walking itinerary mostly followed the GR34 path, one of France’s 60,000 kms of walking trails, or ‘Grande Randonées’. Inntravel had sent GR maps in advance and following them was pretty easy, with red and white markers along every route, as well as additional written directions. Walking on to different hotels most days, Katie and I rotated our daily duties as navigator, so that one of us was free to follow aimlessly along what is also known as Little Britain, due to its historic Celtic links across the Channel.

Indeed, the immediate environs of Troezel Vras did sometimes resemble parts of Devon or Cornwall, with rolling hills covered in swaying wheat fields, protected by hedgerows, elderflower and pine trees. Even the stone cottages with rose creepers and lawns heaving with hydrangeas at every turn felt a tad more Blighty than Brittany. Until we walked down a grassy path lined with poppies, which opened into a giant field of artichokes, or onto a rocky beach with an offshore chateau staring back at us, and we knew this was somewhere quite different.

The country lanes which slipped into dunes, then onto sandy beaches, and back through fecund fields again, were the typical makeup of our first day’s 15K circular trail. It also led us into the ancient town of Pleubian, home to an enormous outdoor pulpit, where pilgrims must have trodden the same paths as us to hear their Sabbath sermon. We stopped at the beach of Port Beni to tuck into our picnic lunch of salade à la Jean-Marie, fruit, Madeleines, baguette and cheese, with similar deliciousness being supplied by all our hosts who awaited us along the coast.

The cathedral town of Tréguier, Brittany

The seascapes did start to vary every day, however, as did our inns for the night. Our second stopover was at Tréguier and, with our luggage being safely deposited for us, we took on another 15k of the coastline, with Brittany’s famous pink granite now starting to come into view. Jagged rocky outcrops pepper the shoreline here, and even though they just look like dots on the map, we soon realised that this prolific archipelago is awash with islands boasting cottages, campsites or, quite simply, burgeoning colonies of seabirds.

These rocks were just teasers for later in the week, however, as we headed back onto forest lined estuarine paths, with waterfalls and wooded glades, and finally alongside a creek fed by the River Jaudy, into the cathedral town of Tréguier. Here, the hotel Aigue Marine, very different to the last, felt like it hadn’t changed much since the 50’s, but in the most charming way possible. We didn’t see much of it anyway, too exhausted even to try out their pool. Plenty of energy to sample their superb food, though, which was now becoming a regular feature of the holiday, with langoustines, sea bream and a glass or two of Breton cider to completely wipe us out.

Although we had plenty of sunshine, the Brittany weather did keep us on our toes, with every season crying for attention on an hourly basis. You need to bring everything in your walking backpack on this trip really, raingear being regularly swapped for t-shirts and fleeces for togs, with this blue as the Med but cold as Kerry coastline begging a quick dip or two. The rain, which came down softly for just one full day was, thankfully, soft and mild, so walking was still more than manageable, when we took on our stretch from Tréguier to Perros-Guirec.

From this point onwards, as far as our final inn at Trégastel in fact, the scenery seemed to crescendo into an explosion of pink. Every headland brought greater examples of natural, pink granite sculptures, tumbling off cliffs like fruit fallen from a giant’s orchard, or jutting out of the water in surreal displays (see video below, bit wobbly in parts but you’ll get the idea!) . It was as if we had entered a world of Roald Dahl meets Henry Moore.

The Hotel Manoir du Sphinx in Perros-Guirec provided a sumptuous send off point for this final stretch too, with clifftop views, silver service Breton feasts, and room with a view of the waters which had just fed us. This is the place to have breakfast on the balcony, and with the Plage de Trestrignel just a few minutes away, you can catch a swim before breakfast. It’s also the place where Katie won my travel companion of the year award, producing a hipflask of fine single malt for a late night sup on the strand.

The pink granite is almost impossible to capture in photographs, because these rocks are, ultimately, a tangible experience, only truly appreciated by being climbed on, swum out to, fished from or dived off. We followed the ‘Sentier des douaniers’, a narrow clifftop path used by 18th century customs officers prone to pounce on smugglers and pirates, which leads into an extraordinary natural sculpture part at Ploumanac’h. My most treasured moment, however, was the descent into the beach at St. Guirec, where the pink, mammoth rocks which were now smooth backed and softened by the waves, spread out like basking whales across the bay.

A walking and wild swimming holiday

We raised our final glass in Trégastel, where more islands and coves awaited us. The last dip was taken off the shores of Ile aux Lapins, just minutes around the coast from the town, accessible via a sandy causeway which gets covered when the waves come in. As I sat on the sand, letting the sun dry those last few drops of sea on my body, as if to keep this sensation until I got home, an elderly French gentleman must have read my mind, when he stopped to chat. I told him I was heading home, “Ah, so now you can take some of our lovely sea back with you” he said. “Oui, Monsieur”, I said “I love your sea”. What I should have said, of course, was – Armor, je t’adore.

Catherine travelled with Inntravel on the Granite Coast of Brittany self-guided walking holiday. She travelled to Brittany with Brittany Ferries.  For more information on Brittany and its stunning coastline, see  brittanytourism.com.

This article was first published in The Irish Times. You may also enjoy my blog on a family walking holiday in France, in Mercantour National Park.